I am a full time professional bobbin maker, living in Coleford on the Mendip Hills, about 10 miles from the beautiful city of Bath, England.

I started making and selling Bobbins in the mid 1980’s, when I turned wood as a hobby, and attended local Craft Fairs. It was not long before local Lacemakers from Wessex Lacemakers and Clevedon Lacemakers took me under their wing and gave me some constructive criticism re the bobbins that I was producing at that time.  I owe special thanks to Mrs Reed from Bristol Lacemakers. I took their advice, developed my own style and have never looked back. Invitations to Lace events soon followed, and I was producing more and more Bobbins.

In 1986 I won a Gold Medal at the “Woodworker” show for a display of my Lace Bobbins. 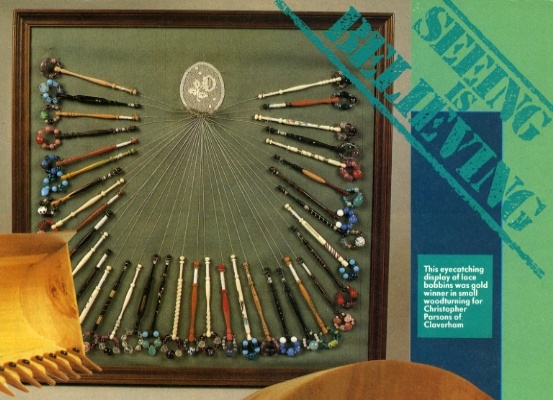 Since 1992 I have been making my full time living from turning Bobbins. I specialize in quality hand turned and hand painted Midland (spangled), Honiton, Flanders, Binche, Bayeux , Continental, Square and Travel Bobbins in wood and bone. I am probably best known for my painted Bobbins and Tatting Shuttles

I am one of only two Bobbin makers/suppliers in the UK that have a license from Copyrights to hand paint some of the characters from Beatrix Potter (Copyright Frederick Warne and co 1991). 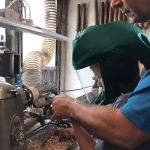 Here I am with my son Joseph in my workshop.  Who knows maybe one day it will be “Lace Bobbins by Chris Parsons and Son”

Have a look on my “Bobbins” pages to see all the different Bobbins I make, also at The Bobbin Shop where you can buy my Bobbins online.

We use cookies on our website to give you the most relevant experience by remembering your preferences and repeat visits. By clicking “Accept All”, you consent to the use of ALL the cookies. However, you may visit "Cookie Settings" to provide a controlled consent.
Cookie SettingsAccept All
Manage consent

This website uses cookies to improve your experience while you navigate through the website. Out of these, the cookies that are categorized as necessary are stored on your browser as they are essential for the working of basic functionalities of the website. We also use third-party cookies that help us analyze and understand how you use this website. These cookies will be stored in your browser only with your consent. You also have the option to opt-out of these cookies. But opting out of some of these cookies may affect your browsing experience.
Necessary Always Enabled
Necessary cookies are absolutely essential for the website to function properly. These cookies ensure basic functionalities and security features of the website, anonymously.
Functional
Functional cookies help to perform certain functionalities like sharing the content of the website on social media platforms, collect feedbacks, and other third-party features.
Performance
Performance cookies are used to understand and analyze the key performance indexes of the website which helps in delivering a better user experience for the visitors.
Analytics
Analytical cookies are used to understand how visitors interact with the website. These cookies help provide information on metrics the number of visitors, bounce rate, traffic source, etc.
Advertisement
Advertisement cookies are used to provide visitors with relevant ads and marketing campaigns. These cookies track visitors across websites and collect information to provide customized ads.
Others
Other uncategorized cookies are those that are being analyzed and have not been classified into a category as yet.
SAVE & ACCEPT